Most dogs lead more interesting lives than rats. To figure out what dogs might dream of, researchers performed a test that temporarily disabled the pons.

If, like me, you’d never heard of the pons before this, let me explain. The pons is the part of the brain stem that is involved in the control of sleep cycles and the regulation of deep sleep and is responsible for inhibiting your large muscles from moving during sleep. In other words, you can thank the pons for preventing your partner from flailing around during dreams and waking you up. Without the pons, we might act out everything we were dreaming about — probably with disastrous results.

You may have noticed that puppies and older dogs twitch and move a lot in their sleep. This is because the pons is underdeveloped in puppies and less efficient in older dogs, according to Stanley Coren, a professor emeritus of psychology at the University of British Columbia. The same is true for human infants and older adults.

Researchers figured out that one of the ways to discover what dogs might dream about is to temporarily disable the pons during REM sleep. This allowed them, under carefully controlled conditions, to let the dogs act out their dreams.

The results were pretty much what we’ve all suspected for years.

Does the Dog’s Breed Affect Dreams?

People vary as to how often they dream and what they dream about, and researchers believe that is true of dogs, as well. Coren reports that small dogs have more frequent dreams than large dogs, but those small dog dreams are shorter in duration. Large dogs, on the other hand, have fewer, but longer dreams.

We can also hazard a guess that what your dog does all day determines his dreams. While we can’t yet be sure, the fact that Pointers point and Dobermans display guard behavior implies that breed-specific activities may take place during dreams, too. Your Labrador Retriever, for instance, is more likely to dream about chasing tennis balls than is a Pug.

Do Dogs Have Nightmares?

Not all human dreams are good. We infer that dogs can have nightmares, too. These nightmares are hard to watch. It can be tempting to wake your dog to comfort her, as you would a child, but there are some risks associated with doggy nightmares that you should share with your family.

If you’ve ever been woken from a scary dream, you know that it can take a minute to remember where you are and whom you are with. Like some people, dogs can react aggressively toward the person waking them. This can be dangerous, especially for children. The best thing that you can do for a dog you think is having a bad dream is to wait for your dog to wake up and be there to comfort him, following the old saying “let sleeping dogs lie.” 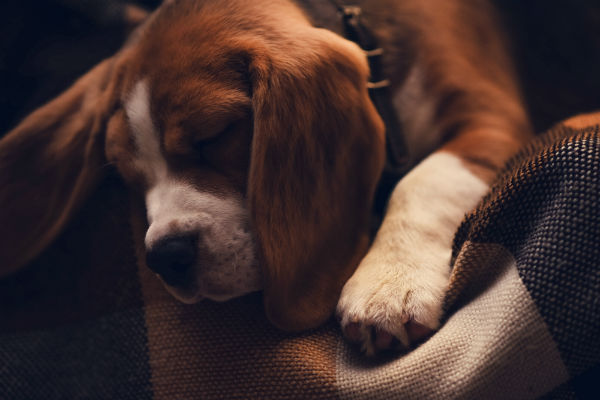 What Is My Dog Dreaming About?

There is no way for us to know exactly what makes up the stuff of our dogs’ dreams, but we might be able to guess.

Observe your dog during sleep to see what he does. REM sleep typically begins 20 minutes into a nap and lasts for two-to-three minutes. This is when you might notice your dog twitching or making sounds. Are there any similarities between your dog’s actions during REM sleep and his daily activities?

My dog, for instance, does a lot of running in her sleep. Her paws are always twitching, and her lips move. Is she chasing something? Playing with a doggy friend? Chasing an intruder? Or simply running down her tennis ball in a big, open field? I don’t know the details, but since these are her favorite things to do while awake, I am pretty sure she dreams about them.

Sometimes, our dogs give us even more clues. In an interview with a Harvard psychologist, one owner reported that he suspected his dog had recently had a nightmare about bath time. This dog did not like baths, and when the bath was over, he always ran to the owner and hid between his legs. He did not perform this behavior any other time. One day, the owner observed his dog having a dream. When the dog woke up, it bolted and hid between his legs, leading the owner to conclude that the dog had just had a scary dream about his bath.

No matter what our dogs dream about, there is some comfort in believing that they, like us, have dreams and fears that play out in their sleep, making us more alike than different.

Get Your Free AKC eBook

Why Do Dogs Twitch in Their Sleep?

Best Dog Beds: How to Choose the Comfiest Bed for Your Pup

Should I Let My Dog Sleep With Me?

Should I Let My Dog Sleep With Me?

Best Dog Beds: How to Choose the Comfiest Bed for Your Pup

Why Do Dogs Twitch in Their Sleep?

Get The AKC Nibble newsletter!
Essential info about dog health, training, sports and more.
For all AKC Newsletters, click here
AKC Privacy Policy
MORE TO EXPLORE
Founded in 1884, the AKC is the recognized and trusted expert in breed, health, and training information for dogs. AKC actively advocates for responsible dog ownership and is dedicated to advancing dog sports.

Does Your Dog Dream?

This site uses Akismet to reduce spam. Learn how your comment data is processed.

SAVING TWO LIVES AT A TIME

Classes are held in Cape Coral, FL and surrounding areas.